So, did you tat a sample from the first lesson? If you want to learn you really have to tat the examples given. Experienced designers build on what they KNOW and what the KNOW comes from tatting. A LOT of tatting. They get a feel for what works from experience and you can gain the same experience from a deliberate series of sample pieces, but you have to actually tat those samples. You can learn a little bit from seeing things, but the FEEL for what works comes from feeling the lace in your hands.

So now that you've tatted your sample, what stitch count did you use? Why did you choose that count? Could you have use something else? Chances are your first instinct was to work with the numbers from a recently tatted piece.

Here are some examples I tatted. In this first example there are 2 stitches between the picots on both the rings and the chains. It looks like the stitch count for the diagram given in Lesson 1 are rings of 2-2-2-2 and chains of 2-2.
(Note: where you see a numbers separated by a dash, the dash represents a picot and the number represents the number of stitches between the picots. So in this example 2-2-2-2   means you start with 2 stitches then a picot followed by 2 stitches and another picot. The whole 2-2-2-2 is a ring with 3 picots. When you see 2+2-2-2,  it tells you the the first picot is a join to the preceding lace.) 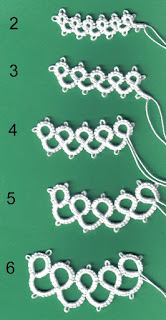 So what's the right answer?

The CORRECT answer is whatever YOU, the designer, says it is.

You can have ring sizes from 3-3-3-3 and a similar range of chain sizes but one thing is consistent, when the ring is larger, so is the connecting chain. Typically if you have rings of 5-5-5-5 the joining chain is 5-5 and if you have rings of 4-4-4-4 the chains are 4-4 because the numbers work.

If you use  rings and chains like the sample here you will discover that if  you have uniform rings like these, that are 5-5-5-5 then chains of 5-5 work well with them. Although, as you can see on the right, you can use a shorter chain, but the shorter you make it, the less of a curve the lace will have.

Is there a way to figure out the stitch count? In the sample shown above, the rings are 5-5-5-5 and a chain of 5-5 will generally fit together with it nicely. There is a bit of math that can help you to figure out numbers that work. First of all, in this edging the join is at the “waist” or middle of the ring. A waist join is very typical in tatting. Now take a look at the diagram below

You can see that from the base of the ring on the left to the join is 5 (marked in blue) and from the join to the base of the next ring (marked in red) is 5. The total of these 2 numbers is 10 which represents the length of chain required. So if the stitch count on the ring on the left was 4 and the one on the right was 8 the chain length would need to be a total of 12. These are approximate numbers based on lace that is in a straight line.

Using 75% of the total number will give you a chain with very little arc. In the example here the total is 10 and 75% of that is 7.5 so a stitch count of 7 gives the almost straight line shown in the picture. When the lace has to bend around a curve like going around a doily or the arch on a heart, the chains need to be longer. If the curve is inverted the chains can be shorter. Of course, this is based on rings joined at the waist.

How does it affect the look if you keep the same ring size, but increase the length of your chain? What if you shorten the chain? What would it look like if you made the ring very large and the chain really short? While these are not things you think about when you’re just following a pattern, they can be real eye openers when you look at how they affect the overall appearance of something as simple as a ring and chain edging. 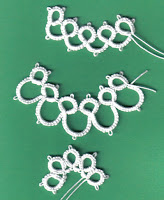 Take a look at the examples above. In each instance the rings are a  consistent 5-5-5-5 but the chains are different. In the first edging the chains are 5-5 which gives you a straight edging. The slight normal curvature would disappear in a longer sample or if I had bothered to block the lace. In the second sample the chains are 10-10 which gives the lace a definite curve and in fact if you tried to straighten it out, the chains would overlap one another. The last sample  has chains of 2 which totally inverts the curvature of the lace. The last 2 samples both give you curves, but in different directions.

Rings are what give your design structure. They don’t stretch, they don’t bend, they’re the framework that holds things together. So when you begin a design, you are generally going to begin with a ring. Chains can be bent and pulled into slightly different configurations, rings can’t.

No one told you what ring size to start with when you did your sample, you just picked a number and started. Chances are, the stitch number you chose was probably the same number as the last thing you tatted before you started the exercise. That’s because we tend to work with what is familiar. You can work with whatever stitch count you want, BUT, and here is where things get tricky, whatever size your first ring is, it will determine everything else.

By the way, in your typical lace, you don't usually see rings larger than 6-6-6-6. That's just a generalization but rings that large tend to leave you with tatting that's more holes than lace. It doesn't mean that you can't have larger rings and in fact the seashell that I designed which uses itty bitty rings of 1-1 also uses rings of 8-16-8 which is huge. However, in the seashell pattern the rings are graduated so most of the lace uses much smaller rings. It's just something to keep in mind when you design your own works of art.

Virtually all tatting patterns begin with a ring and once that first ring is tatted it will put constraints on the length of the chains and the size of the other rings you use with it, in order for it all to be proportional and harmonious.

You can sit down with a shuttle in hand and just "doodle" to come up with something or you can purposefully set out to create a specific design. This is where you sit down with paper and pencil, or with a drawing program and sketch out something you think might work. The advantage of this approach is that you generally end up with something close to what you were aiming for, and although there is some testing of your design, you usually have fewer trial runs before you end up with a workable design. If you have never designed anything before you can start out with a vague idea, sketch it into something tangible and have a good chance that it will actually resemble something when you are finished.

Remember whatever size your first ring is, it will determine everything else. That’s why having a sketch is a good idea. Let’s say you start your sketch with a certain size oval, but in order to get the effect you want you use another smaller oval later on. For simplicity let’s say the small one is half the size of the larger ring. If you had just started tatting the larger ring without a sketch you might have begun with a ring that was too small to make one half the size. You can make a ring that is 1-1 like the sample we looked at earlier, but it’s so small that it can be hard to close and it will often look misshapen. So if you know ahead of time that you will be using different size rings, it’s not the size of the large ring that determines your stitch count it’s the size of the small one.

That brings us to our next exercise. For this one you will need to tat 3 different ring and chain samples. These samples are things that you can keep and refer to when you are doing future designs, so while they aren’t pretty lace, they are pretty useful, so add them to your bag of samples. 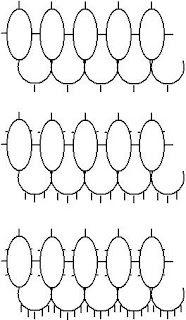 All this tatting of little samples may seem like a waste of time, but you will be amazed at how different each of your samples will look. I was teaching a group of ladies to tat and one of them had a hard time understanding that the number of picots in made no difference at all to the size of the ring or the length of a chain. So, during class I tatted a row of ring and chain beginning with minimal picots on the first ring and with each ring and chain I increased them, until on the last one the picots were separated by a single stitch just to show her what I meant. I had intended the exercise for a student, but in the end my own sample was a visual reminder for ME that good use of decorative picots can change the appearance of  even a simple length of ring and chain edging.

As usual, if you have questions or comments you can add them to the comments on the blog. I'm trying to lay things out as simply and succinctly as possible, but if you have questions, other people probably do too and they may need the answers just like you do. The only bad question, is the one you didn't ask.