Here is another challenge not with tatting, but with thinking about designs and what makes a good one. You may not care for doilies, but they're good for demonstration purposes. Below are pictures of 2 doilies, one from an older publication and one from a newer magazine and the reason I'm showing them to you, is they look much like the first doily I tried to design. Actually, I've had several people show me their first attempts and they look like these ones too. 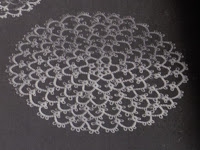 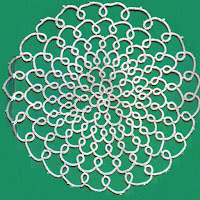 What do you think of them?
Are they interesting designs?
What kind of details do they have?
What would you do differently?

Both of these doilies are simple rows of ring and chain which is what a lot of beginning designers start with and while it makes a decent doily, it's really boring.

What about this design? 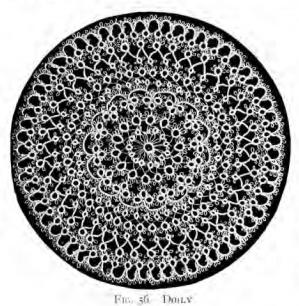 Take a closer look at the construction of it. In the centre it has a centre single shuttle medallion, followed by a row of clover and chain. Then there is a single shuttle row that repeats the motif of the centre medallion. Repeating a design element is a good idea because it makes for a more cohesive design. The next row has both inward and outward facing rings and the outer row is ring and chain.

The first two doilies were very repetitive, but also uninteresting. In this doily there are variations in the rows which makes it more visually appealing. It's more interesting, but it's still just concentric rows of lace and it's hard to separate out one row from the next to focus on the details.

More techniques also means you have more ways of achieving the results you want. Maybe a split chain or split ring will put your threads in a better position or maybe cluny tatting will add density where you want it in your design. Or Josephine knots will leave a trail of pearls in your lace. Each technique you know gives you more options.

Now take a look at this design from a Burda magazine. It kind of looks like a flower with a central circle and petals radiating around it. 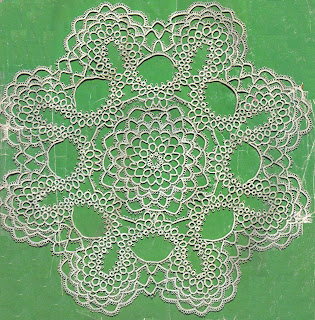 It isn't what's there that gives it interest, but what's not there. You see the centre part with the concentric rings that are kind of boring, but then you get to the wavy row of single shuttle shuttle lace where each section joins back to itself forming an empty loop. and your eye is drawn to the outside. The next row forms large empty arches that again draws your eye outward. The outer rows of chain just bring the whole thing together again in one cohesive unit. It's the empty areas know as negative space that really make the difference.

Negative space in a design gives your eye a chance to rest. It spaces out the lace so that you can see the individual rows of lace, along with the whole design. The negative space actually creates designs within designs making the lace more intricate and more appealing.

When you see a completed design, those empty spaces make sense. When you're a designer tatting it can you imagine just making a huge length of chain that doesn't seem to go anywhere or be connected to anything? Making those empty spaces can be challenging for a designer to create but they make superior designs.

Look at the row that joins the single shuttle loops to the centre of the doily. See which way the picots face? This doily isn't constructed in the usual manner with each row being attached to the one before, it's done in sections. The central part and the single shuttle row are completed separately and then the connecting row is done joining both parts together.

Why do you think the designer did it this way? Is it possible that the designer made the outer section intending to join it to a centre circle of fabric and then decided to make it all lace? Or maybe they were parts of other designs that were just joined together to make a whole. That's the fun part about designing. You don't have to colour inside the lines. If your imagination takes you somewhere different, don't be afraid to give it a try, you might be surprised.

Take a look at other doily designs, especially those that appeal to you and see if you can figure out how the designer came up with that design. What design elements did they repeat throughout the whole? Where did they have to take a tatting leap to create negative space? Do you think you would have been able to envision making that empty space at that point and in that way? Designing often means training yourself to look at things differently. Thinking outside the box is a designer's greatest asset.

So much knowledge & insight shared here !!! I learned a lot when tatting Renulek's Wiosna earlier this year, & seasoned tatters chipping in with their wisdom. But your post adds even more insight. Hopefully I will be able to apply this knowledge in future.
I hadn't noticed the undulating single shuttle round in last doily was made in 2 parts ! Off to get a closer view to understand those intricacies ....
Thanks again, for a wonderful piece !

The first things I noticed about the last doily was the negative space and the shift from a the circular center to the loops and arches. When I looked more closely and saw the inward-facing picots, I thought, "I can't imagine myself thinking that far outside the box." Then when you suggested some of the possible ways that the designer might have come to make that choice, it seemed so much more likely that I COULD see myself coming up with creative ways to make something work. Thanks, Sharon. This is what I love about your approach to teaching design. You make me think and see the possibilities.